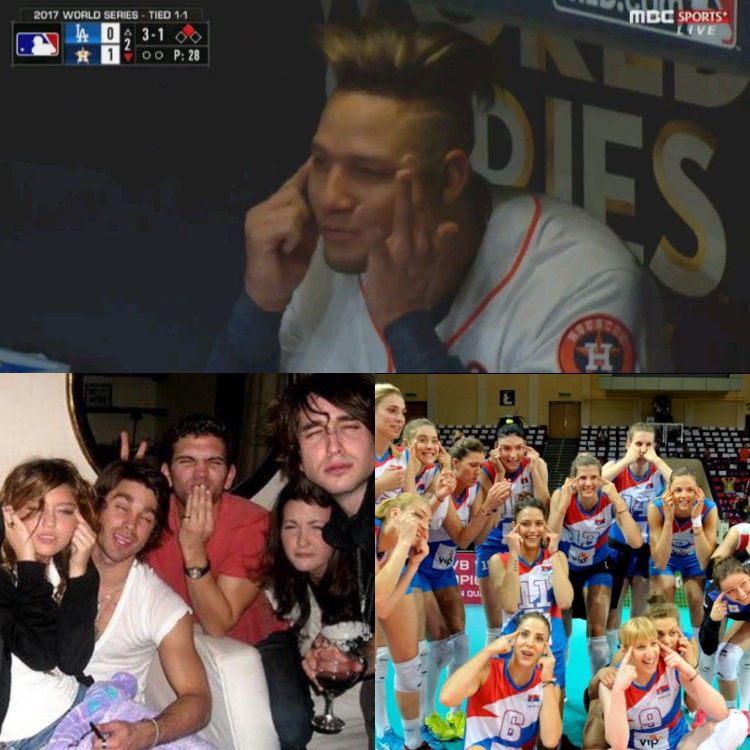 Slant Eye Syndrome: Being subjected to people pulling back the outer corners of their eyes in your presence because you’re Asian.

For anyone who has been following the MLB postseason this year, or for anyone who is active on social media, I’m sure you heard all about what Houston Astros’ first baseman Yuli Gurriel did during Game 3 of the World Series. It was the bottom of the second inning and Gurriel had just hit a home run off of L.A. Dodgers pitcher Yu Darvish, who happens to be of Japanese and Iranian descent. After celebrating in the dugout, with all the cameras on him, Gurriel could be seen mouthing “chinito” (which means “little Chinese boy” in Spanish) and pulling his eyes back to make them appear “slanted”. In front of a national TV audience, one of the World Series’ biggest stars was seen making a mockery of the opposing team’s pitcher, and indirectly, all Asian people, by using the oldest anti-Asian joke in the book.

Now, as offensive as his gesture was, in my opinion, his fake apology was even worse. Clearly, he knew he had messed up, but his apology was anything but sincere, showing that he was only apologizing because he felt he had to. His excuse? Gurriel, who is from Cuba, says that in his home country, they refer to all Asian people as “chinos”. And as for the slanted eye gesture…well, he is sorry if anyone felt offended by that. Now let’s dissect this sad excuse for an apology a little further. I know things are different in different cultures and having never stepped foot in Cuba, I can’t really attest to what their culture and race relations are like over there. However, what I do know is that there ARE words in Spanish for different Asian nationalities and these words were created for a reason. And it wasn’t so we could all be generalized as a bunch of “chinos”. Furthermore, Gurriel previously played in Japan and admitted to knowing that they did not like being called “chinos” over there, so he knew exactly what he was doing when he called Darvish a “chinito” and pulled back his eyes. And as for him being sorry if anyone felt offended, we all know that’s just another way of saying, “Sorry I’m not sorry.”

So okay, Gurriel received some backlash in the media, and was ultimately handed a 5-game suspension for the 2018 season. But what’s a 5-game suspension when the season is 162 games long, not including the postseason? He basically received a slap on the wrist from the MLB commissioner, and unfortunately, I expected no different.

Here in America, where we live in such a PC culture, and where nowadays, being racist is perceived as the ultimate sin, how do we let Gurriel get away with being blatantly racist towards an entire group of people? Oh, that’s right, it’s because the offensive act was racist against Asian people.

It has bothered me for some time now that in this sensitive environment we live in, somehow offenses committed against Asians are constantly swept under the rug. There was the time that Jeremy Lin was referred to as a “chink in the armor” on the front page of ESPN.com. And there are numerous rap songs out there that use the word “chink” or the phrase “chinky eyes” that people will listen to and sing along with without even batting an eye. To me, the problem isn’t that Gurriel made a racist gesture against Asians for all of America to witness. I mean, I don’t even necessarily think it makes him a racist. I highly doubt he hates Asian people…perhaps he thinks we’re easy to make fun of, but hate? No. The real problem to me is how lightly we as a country take racism against Asians. If Guriell did what he did against any other minority group, there’s no way in hell he would be playing another game in this series.

However, the blame doesn’t fall squarely on America and those who fail to punish offenses against Asians. I think we Asians need to be more vocal and active about things that affect our community, and take a stand against them. While I appreciate Darvish taking the high road and encouraging positivity instead of anger, I feel that his response is indirectly giving off the message that what Gurriel did is not a big deal. I know that wasn’t his intention, but in typical passive Asian form, Darvish not getting mad about what happened reiterates the tone that it is okay to mock Asians and we’ll just sit back and take it. It is important to pick our battles and not get riled up about every little thing that could potentially be offensive to us. However, if we don’t start speaking up now, especially about something as outrageous as an MLB star making slanted eyes at a Japanese player, we will continue to be the butt of jokes, thereby, perpetuating other problems that affect the Asian community.

For now, those are my two cents on the situation. I’m going to continue to be petty and root against Gurriel and the Astros in the World Series, though I don’t think that’s going to end favorably for me and the Dodgers, but we shall see.

What are your thoughts on this? Feel free to comment below!

6 thoughts on “The Slant Eye Syndrome”