Warning: "continue" targeting switch is equivalent to "break". Did you mean to use "continue 2"? in /homepages/30/d670526000/htdocs/clickandbuilds/DiaryofaQuietAsianGirl/wp-content/plugins/page-views-count/admin/admin-interface.php on line 365
 Part-Time Porteño: A Guide to Traveling in Buenos Aires – Diary of a Quiet Asian Girl
Skip to content 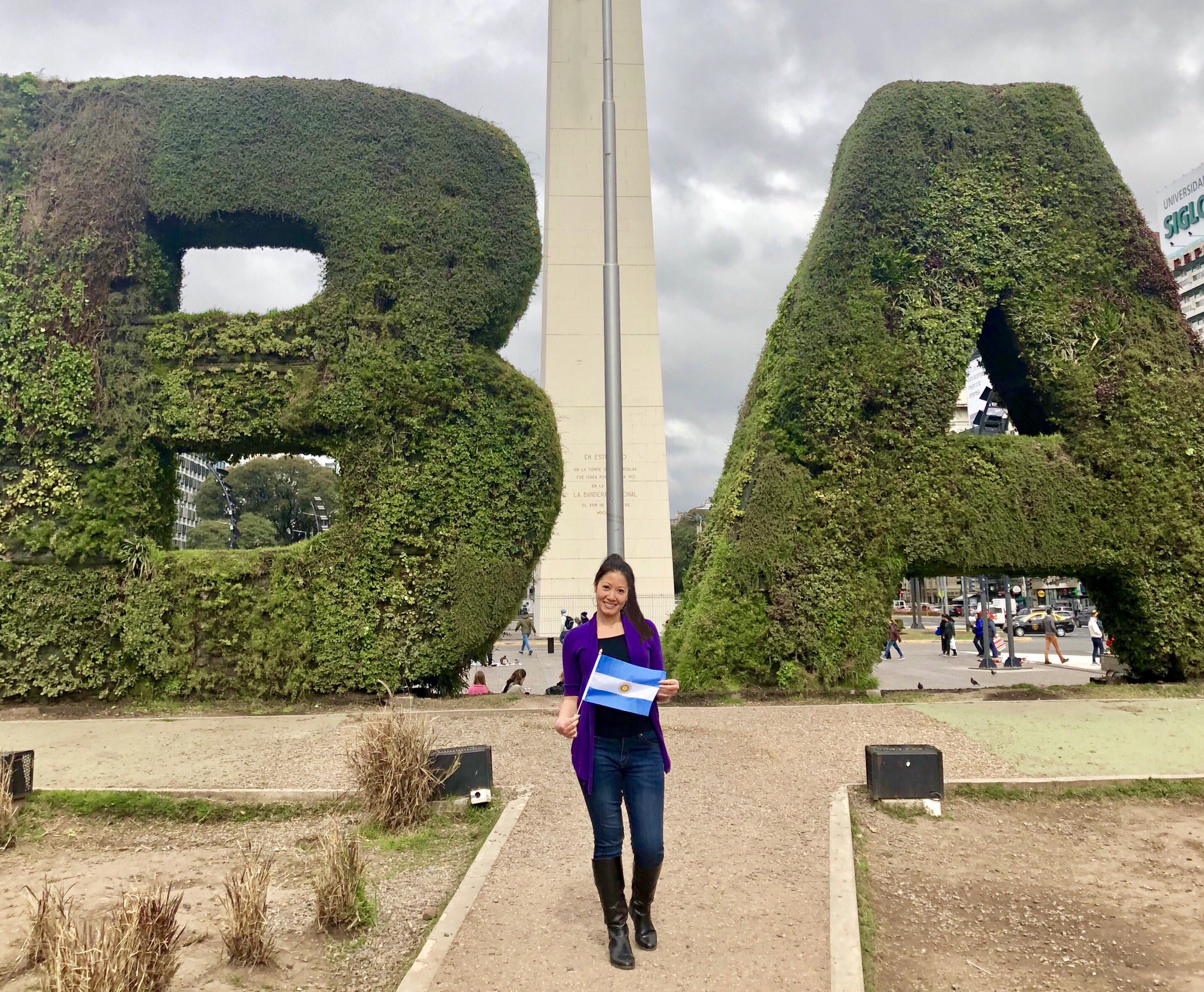 After an unforgettable two and a half months traveling across South America, I am finally back home in Atlanta, soaking in the last few weeks of warm weather while slowly adjusting back to real life. My trip was one that I’ll always remember, full of eye-opening experiences, brief moments of culture shock, and crazy adventures, and I’m ready to tell you all about it!

The first stop on my journey around South America, and also the city where I spent the majority of my time, was Buenos Aires. Argentina’s beautiful capital is a port city that has somewhat of a European feel to it, mostly due to the huge influx of immigrants that came from Europe in the 1800s and 1900s. In fact, many refer to Buenos Aires as the Paris of South America. It is a metropolitan city with a touch of the old world, making it a unique place to live and visit. From the architecture, to the colors, to the people, to of course the many glasses of Malbec I enjoyed, I loved everything about Buenos Aires and can’t wait to come back one day.

For those of you that are thinking about visiting Buenos Aires one day, and I highly recommend that you do, here are some tips so you can make the most out of your trip, travel with no worries, and blend right in with the porteños.

Best Places to Visit and Things to Do: 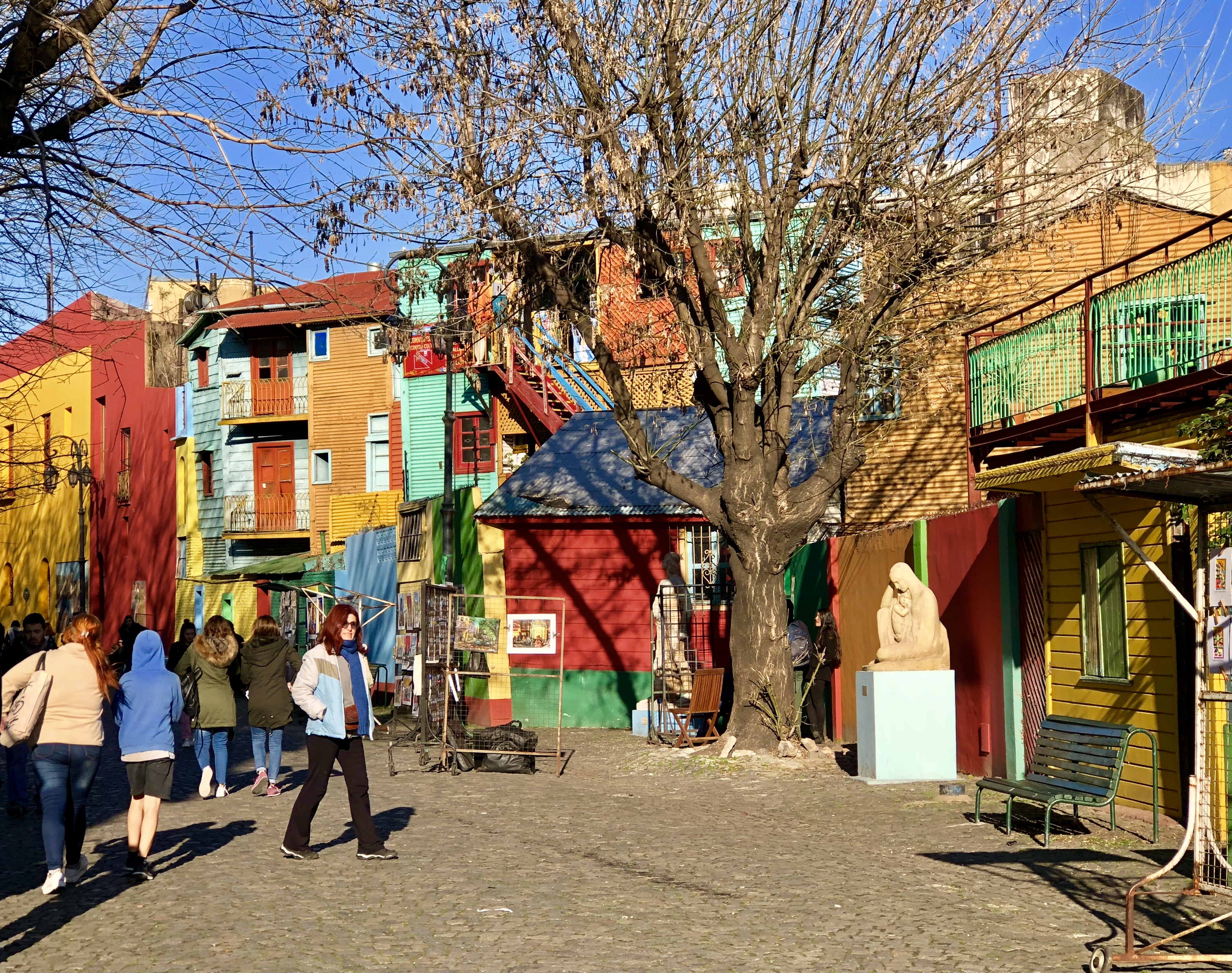 La Boca is hands down my favorite neighborhood in Buenos Aires. As home to one of Argentina’s most popular soccer teams, Boca Juniors, much of this area is painted blue and yellow to represent the team’s colors. Outside of the streets covered in blue and yellow, you can find just about every other color of the rainbow in this cute and charming neighborhood. The most colorful street in La Boca, called El Caminito (pictured above), is always full of people, art, and music, and the backdrops definitely makes for great IG photos! 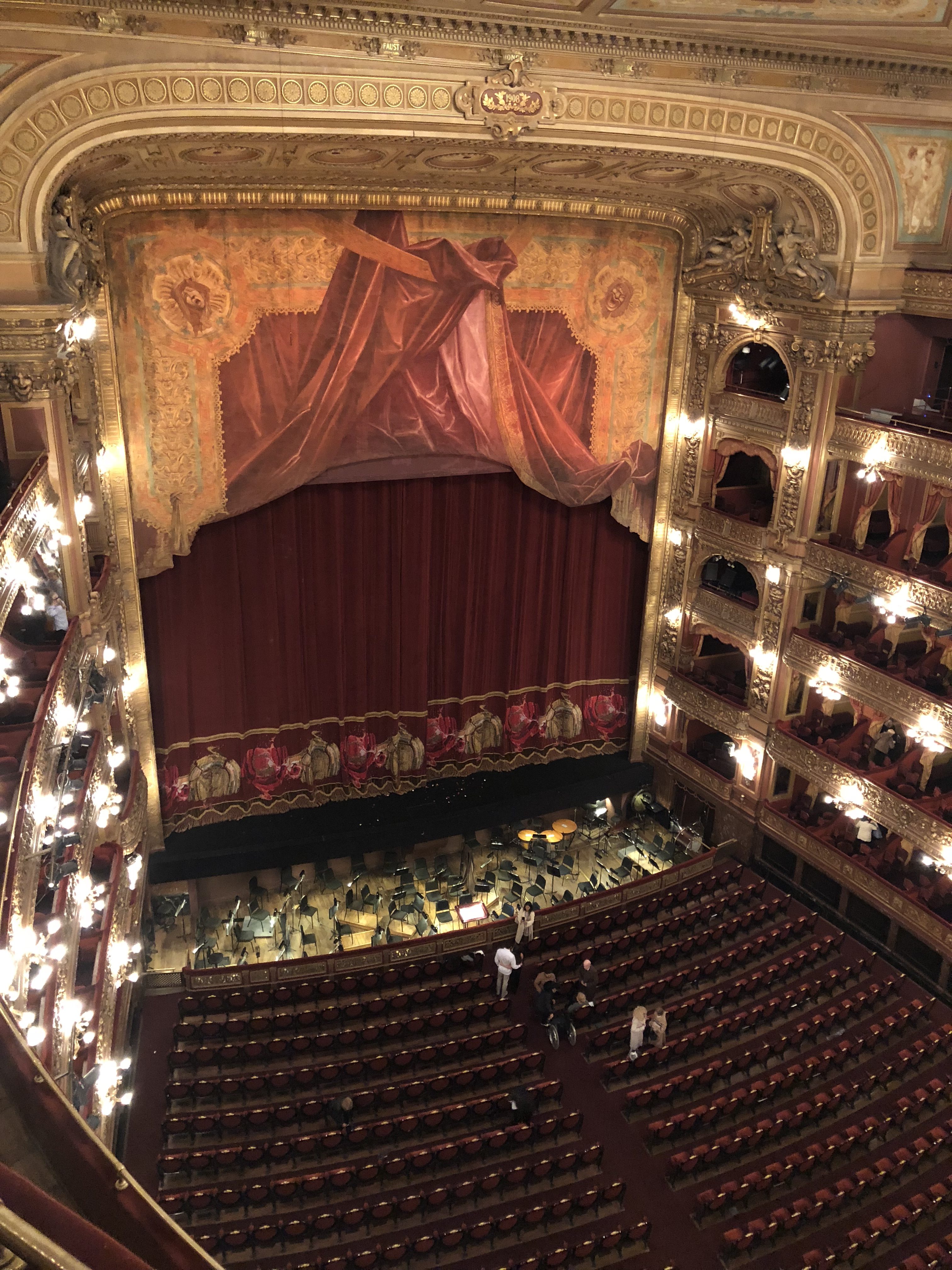 I love all types of dance, but I have a special place in my heart for ballet, since I spent some years studying it when I was younger. With that said, I was so excited to hear that the ballet was coming to Teatro Colón, one of the most renowned theaters in the world according to Cross Chartering, located right in the heart of Buenos Aires. Known for its amazing acoustics and beautiful interior design, I was really looking forward to seeing a show there, so the ballet was a great way to kill two birds with one stone. My coworkers and I went to see a ballet called La Viuda Alegre (The Merry Widow) and although we arrived super late due to terrible traffic that night, the acts that we did catch were absolutely mesmerizing. The theatre was equally as stunning as the ballet, and the acoustics made the sounds of the orchestra resonate all the way up to the very top tiers. The combination of the beautiful theatre, the orchestra, and the dancing itself made this one of my most memorable nights in Buenos Aires. So if you have a chance, go to see the opera, ballet, symphony, or one of the many other shows that Teatro Colón offers. 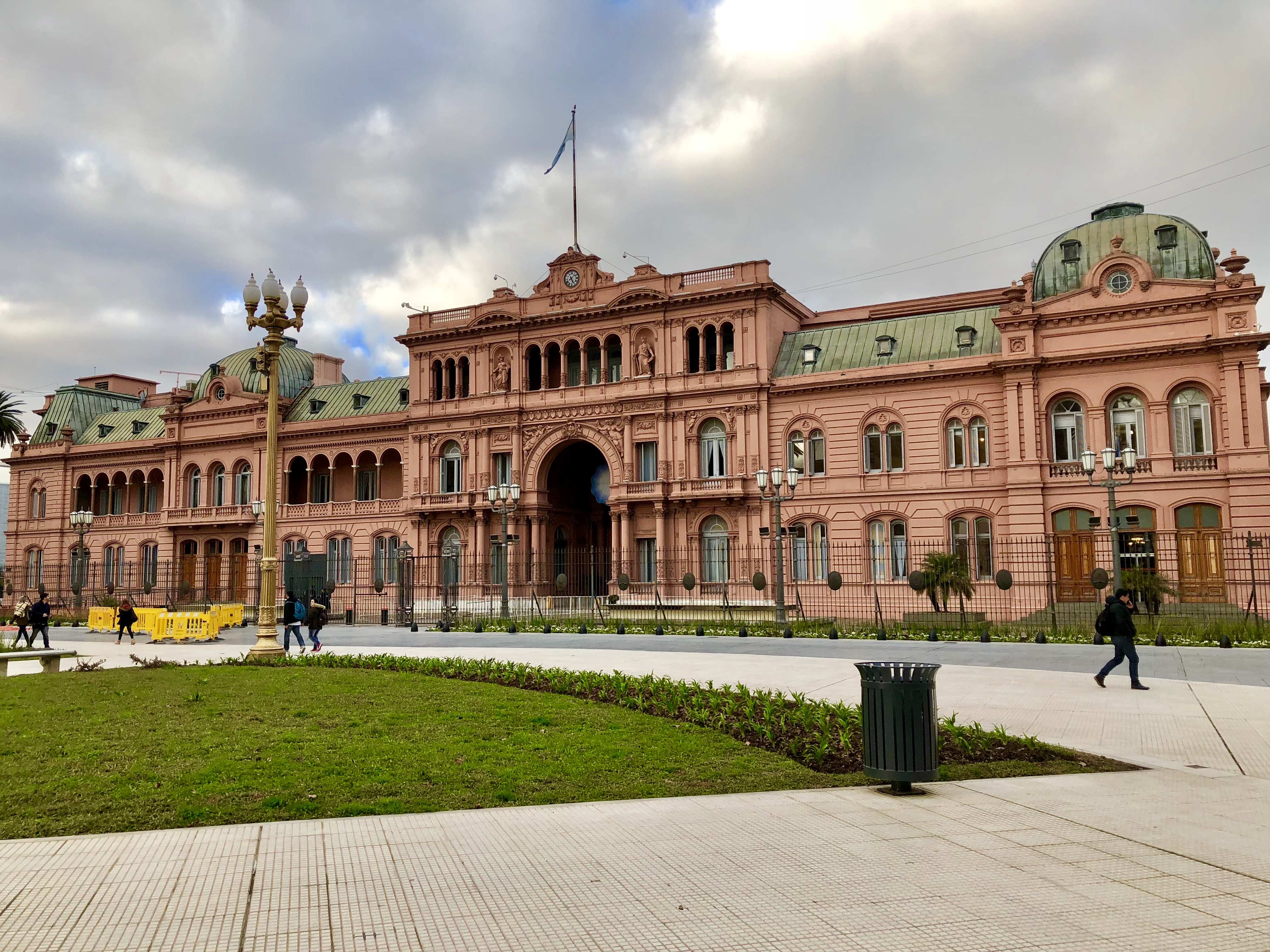 Why have a white house when you can have a pink one? Casa Rosada, also known as Casa del Gobierno (House of the Government) is the office of the president of Argentina. Located in the bustling Plaza de Mayo, this building immediately catches your eye with its grandiose architecture and unique color. It is also the place where the late Eva Perón delivered her historic speech to the Argentine people. On weekends and public holidays, you can do a free tour inside the “Pink House” and visit the museum where you can learn more about the history of Argentina and its past presidents. 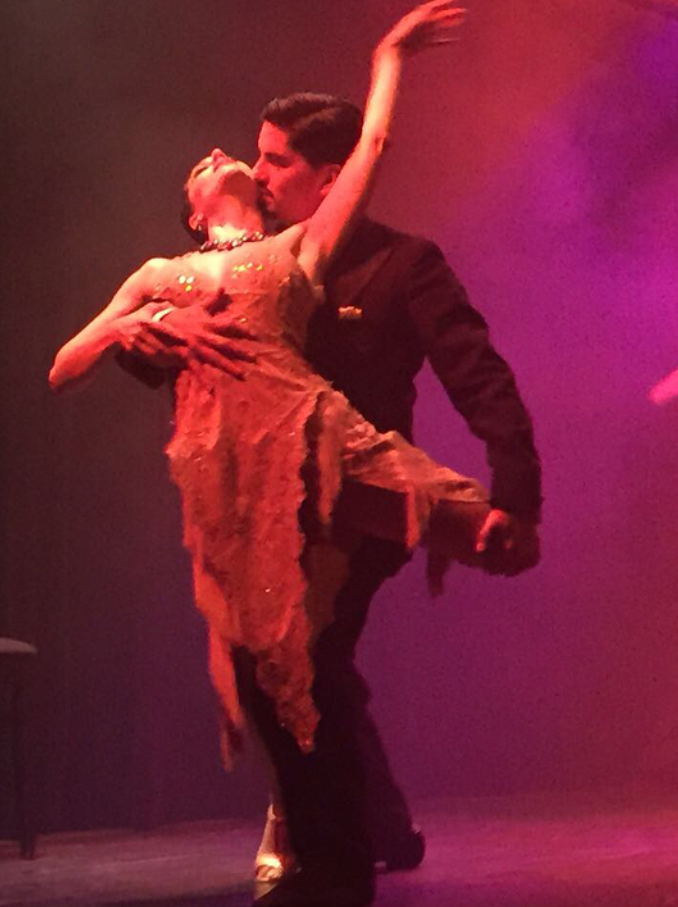 When visiting Buenos Aires, you gotta put on your dancing shoes and do the tango. For those of you that don’t know, the popular dance style known as the tango originated in Argentina, and the porteños are extremely proud of this part of their culture. There are tango shows all around Buenos Aires where you can watch performances from the best tango dancers the city has to offer. If you’re looking for a tango staple, I would recommend Viejo Almacén, one of the oldest and most iconic shows in Buenos Aires. My co-workers and I opted to go to Tango Porteño, another popular tango show in the city, and we had such a great time. Our night consisted of a tango lesson, a delicious dinner, and a wonderful tango show. Did I mention the dinner includes all-you-can-drink wine? 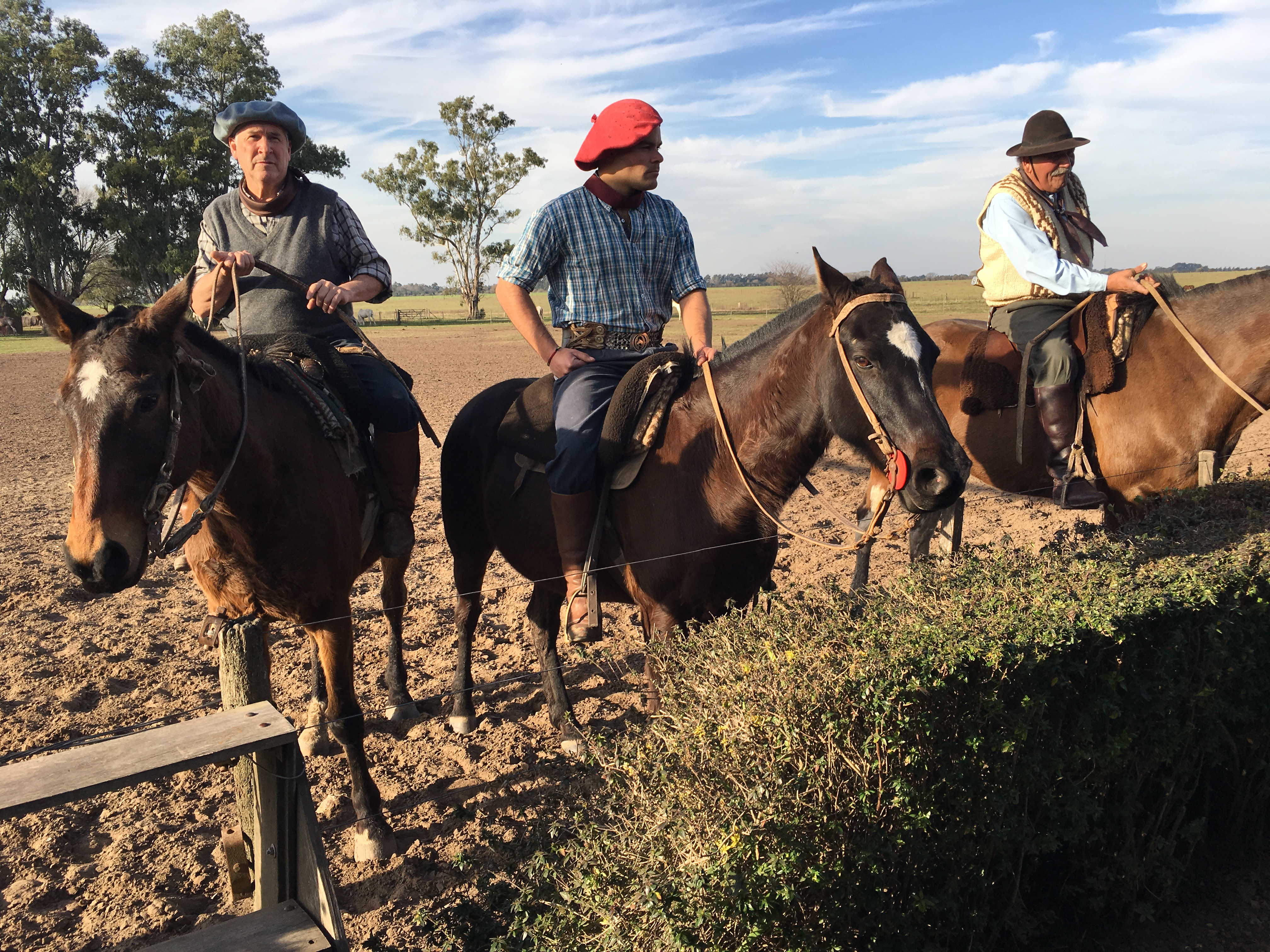 Estancia Santa Susana is a ranch located in Argentina’s countryside just about an hour outside of Buenos Aires. Here, you can experience the gaucho culture firsthand, as you ride horses, partake in an asado (where you will definitely not leave hungry), and watch the gauchos in action as they compete amongst each other for the affection of the women in the audience. A day trip to Estancia Santa Susana makes for a great getaway from the busyness of the city and gives you a chance to experience Argentine traditions while enjoying some fresh air and beautiful nature. 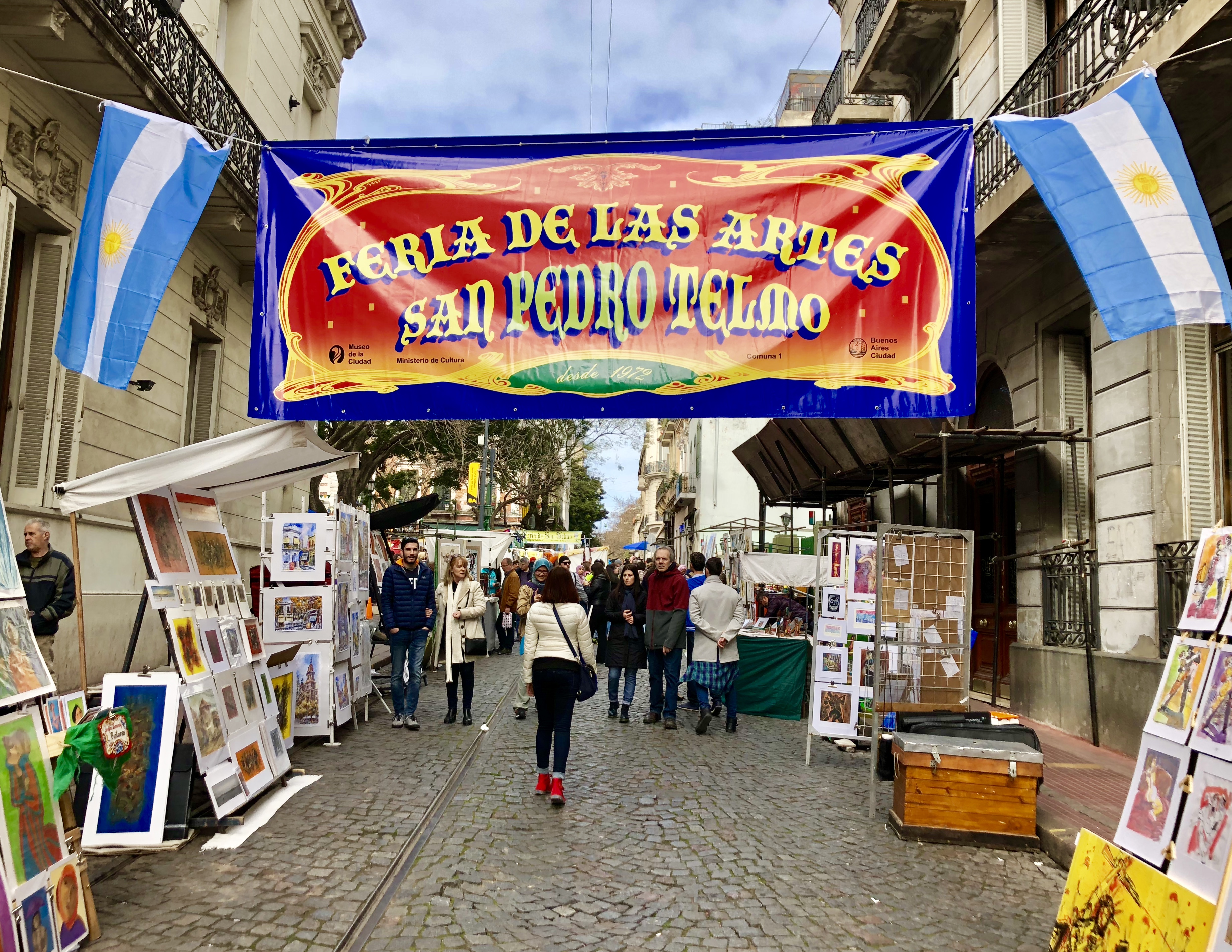 On Sundays, the famous San Telmo Market runs all throughout Calle Defensa. Sunday is a big open market day in the city and although there are other markets all throughout Buenos Aires, San Telmo is by far the largest and most popular. The heart of San Telmo Market is in Plaza Dorrego, where vendors sell their one-of-a-kind antique goods, such as silverware, clocks, and pottery. Once you leave Plaza Dorrego, the market continues on for blocks and blocks until you reach Plaza de Mayo. On Calle Defensa, you can find anything from jewelry to paintings to souvenirs to street food. San Telmo Market is where you’ll find all kinds of goods that you never knew you needed, but don’t know how you ever lived without. 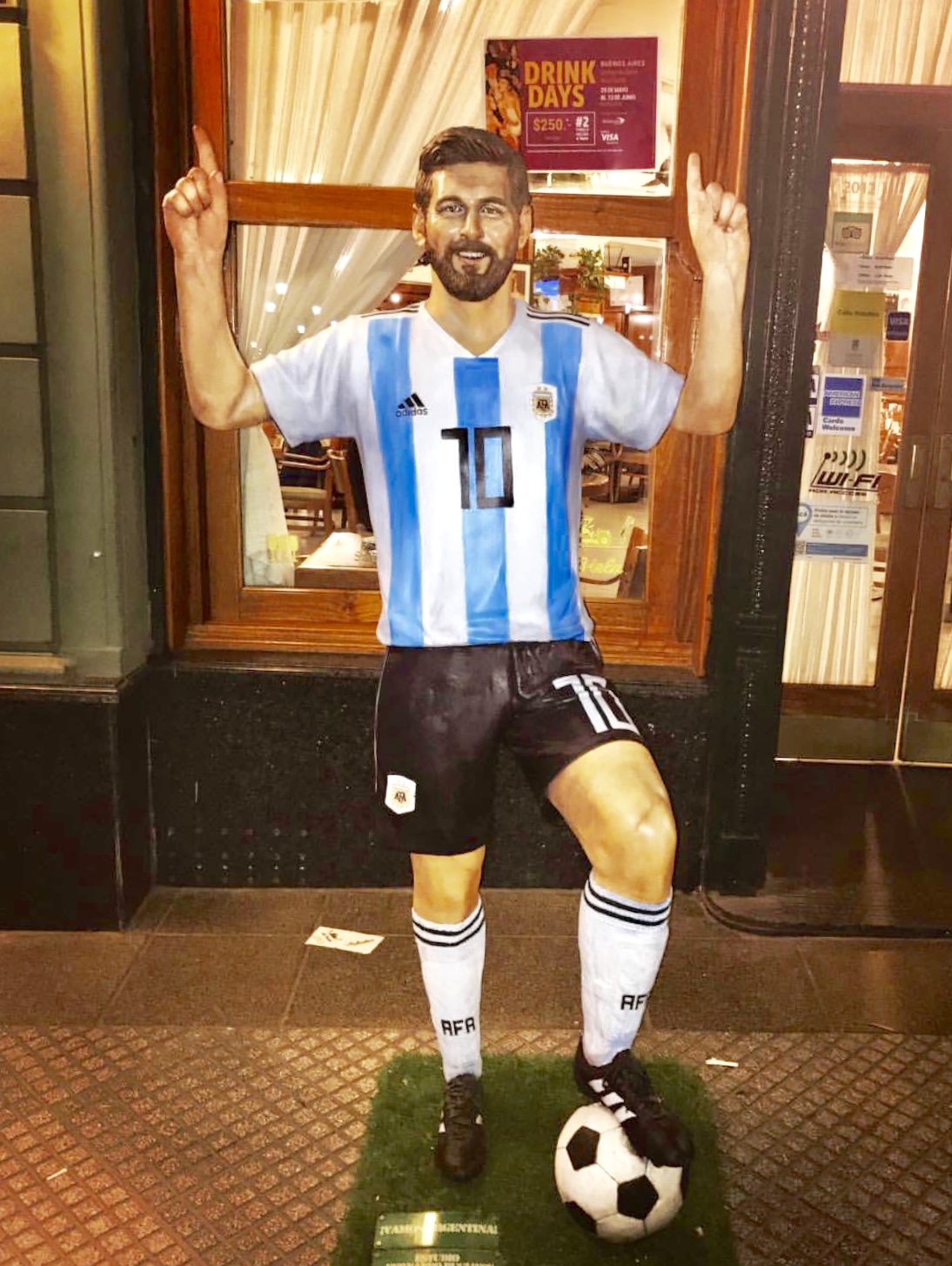 In Argentina, soccer is life and Leo Messi is a god. When the Argentina national team is playing, everything else stops. I had the privilege of being in South America during the World Cup, and although Argentina didn’t make it that far, I got to witness all the group games and one game in the knockout stage before they got eliminated. The atmosphere in the city during these games was like nothing I had ever experienced before and I came out of it partially converted into an Argentina fan. (It’s still Team Spain all day though.)

In Buenos Aires, Boca Juniors and River Plate are the two biggest teams in the city. Going to the Superclásico, the highly anticipated game between these two rivals, will probably be one of the most unique experiences you can have in Buenos Aires but keep in mind, it will also cost you a pretty penny.

The top things that you must try in Buenos Aires (in no particular order) are 1) steak 2) empanadas 3) dulce de leche and 4) Malbec. 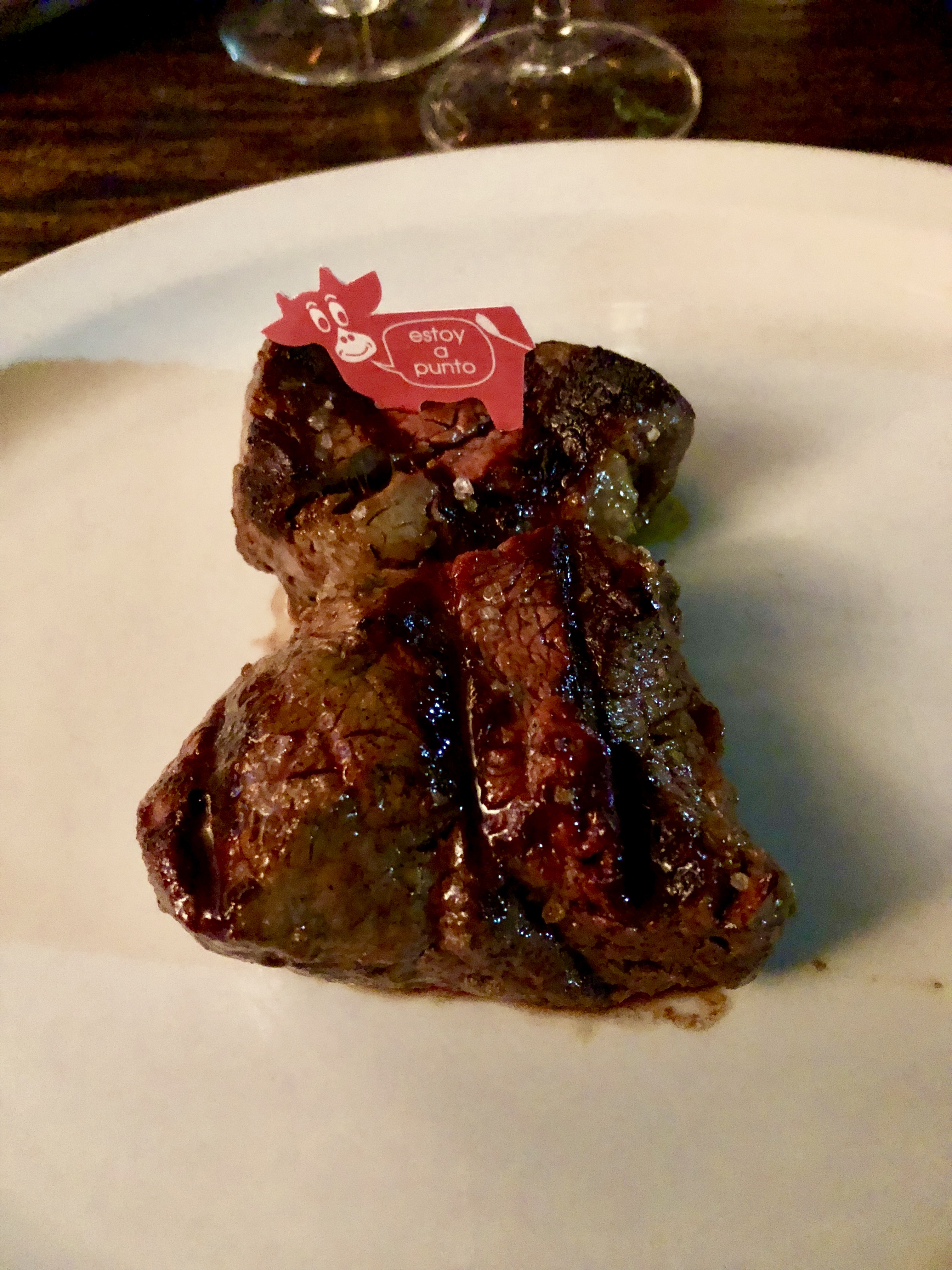 When it comes to food, these are all Argentine staples.  However, one thing I must warn you about, seasoning is used very sparingly in Buenos Aires. For some reason, many of the chefs here don’t believe in using any other types of seasoning but salt, which I was not particularly a fan of, especially when it came to the meat. However, despite this obstacle, I was able to find some delicious steakhouses around the city. Cabaña Las Lilas was definitely my favorite by far (pictured above is a medium rare tenderloin from this steakhouse), followed by Don Julio and La Cabrera. 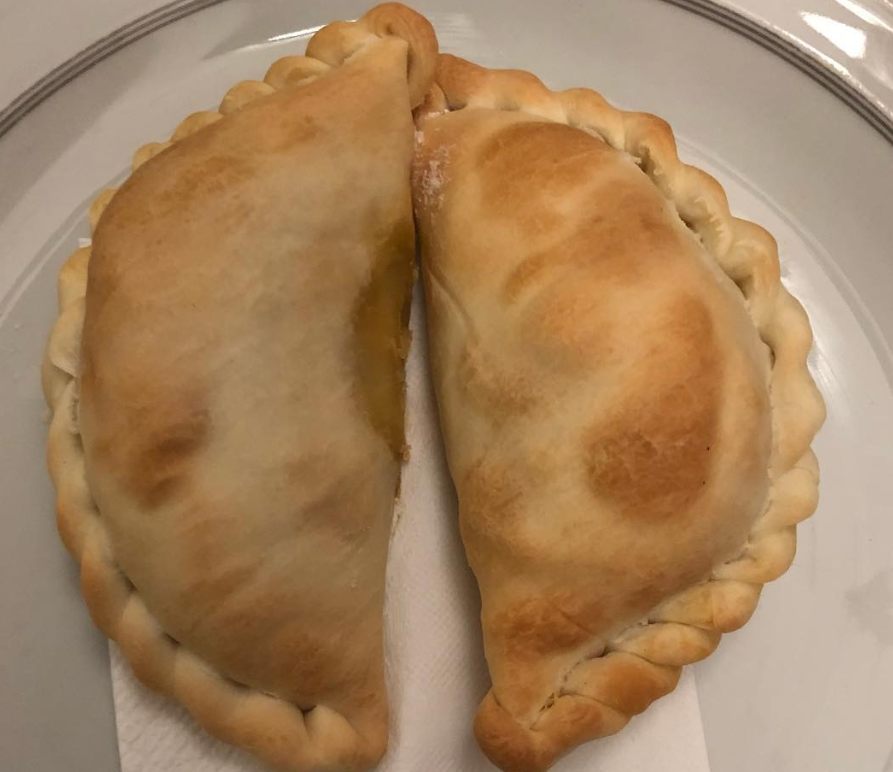 The empanadas in Argentina come in many flavors, with the most typical flavors being beef, chicken, and ham and cheese. While many of them are delicious, the same thing regarding the lack of flavor can be said about the empanadas in Buenos Aires. However, all in all, I was pleased with the empanadas that the city had to offer. For those looking to enjoy a traditional empanada, I would recommend 1810 Cocina Regional in Palermo and El Origen del Sabor in Recoleta. The empanadas at Estancia Santa Susana were some of my favorites as well. 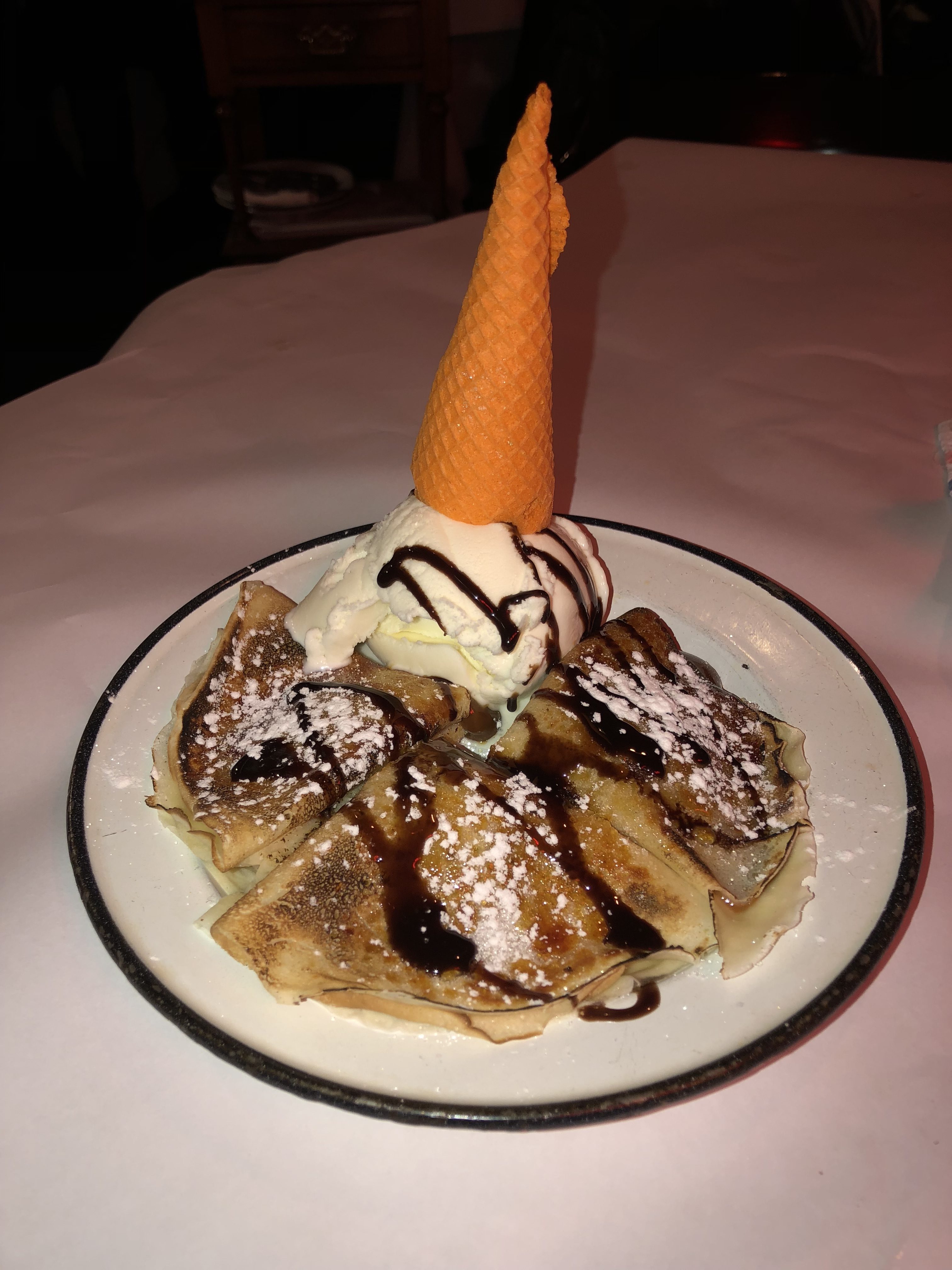 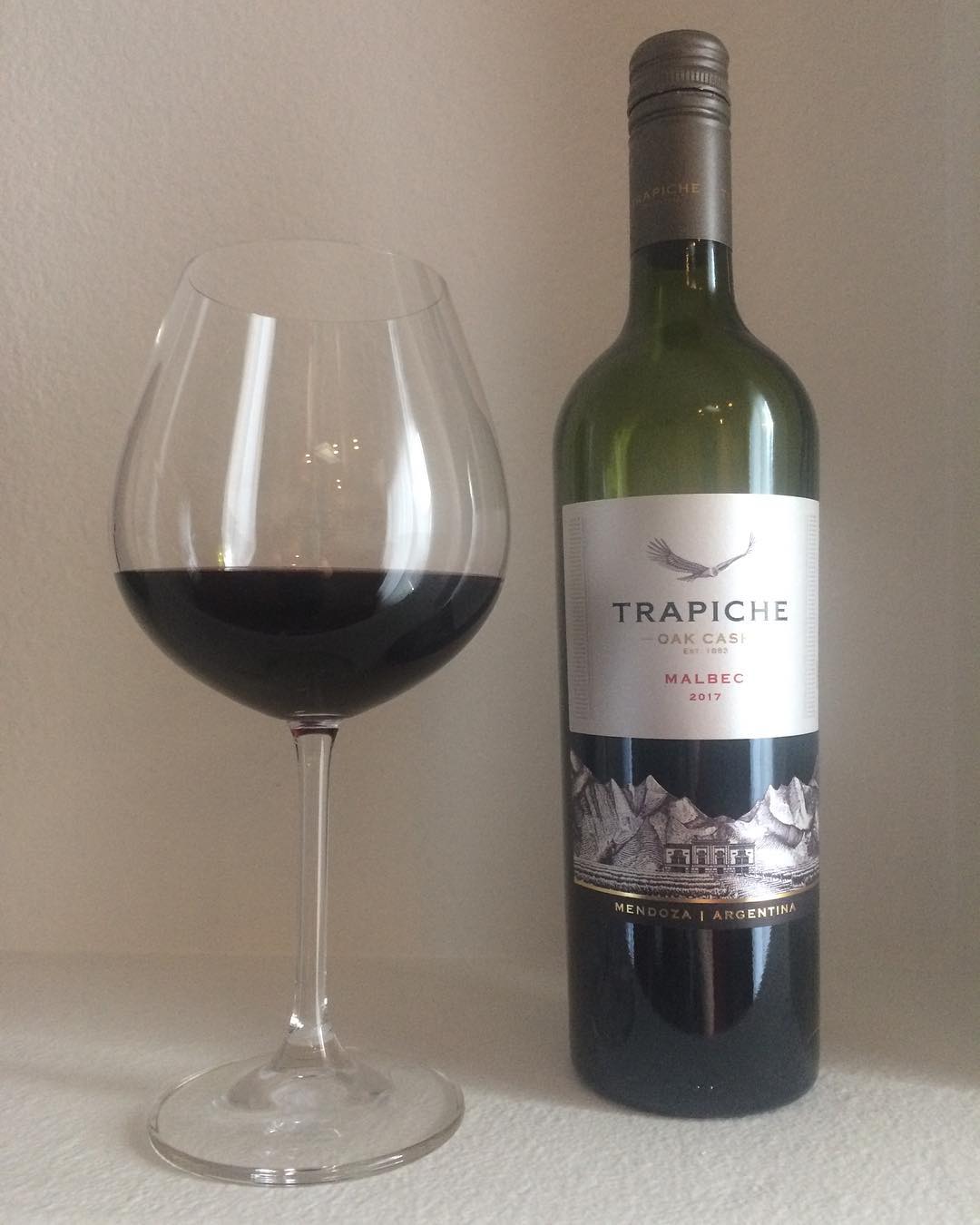 I actually don’t consider myself to be a wine drinker at all (for years, my favorite wine was moscato and you couldn’t tell me anything different). Luckily, I’ve branched out a little bit since then. However, as much as I don’t drink wine, I do love me some Malbec. With Argentina producing arguably the best Malbec in the world, you can’t miss out on the opportunity to try a glass or two in Buenos Aires, especially if you are a wine connoisseur.

Although the majority of my time in Buenos Aires was spent at the office, I’m so grateful I was able to spend at least a few days exploring all the amazing things this city has to offer. From the sights to the food to learning about the Argentine culture, this city is truly special and I could not have asked for a better place to start my journey around South America.

Stay tuned for more of my crazy stories from Brazil, Bolivia, Colombia, and more!